A battery plugin for the Today-Screen

HomeScreen PlusPlus is a freeware today-plugin which shows the remaining load of the main battery for XDA Neo (HTC Prophet – Windows Mobile 5 Phone Edition). This is the function by design. Other devices are reported to work with this plugin as well. Have a look at the requirements. 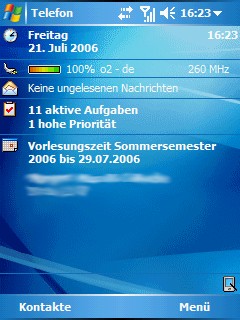 It looks similar to the O2-Battery-Plugin of XDA mini, but without the remaining load of backup-battery. In consideration of the weak average batteryperformance, this plugin does not poll for values if you dont want it do so. The powermanager (on his way) pops in when something regarding the battery has changed and notifies (us) the plugin …
Similar to the batteryload is the implementation of the mobile operator name, which is notified by the notification broker of WM5. Hence the code of this plugin is only touched when there is a need to do this.

Furthermore it can count incoming and outgoing sms for monthly usage and show the actual cpuspeed.

HomeScreen PlusPlus can also log (write into a file) the date, time, duration and callnumber of incoming and outgoing calls and sms to an xml-file.

There are also indicators which needs to poll periodically and can be activated/deactivated by show or hide them. These indicators are actual signal strength of phone modul, free memory for program-storage and sd-card, free memory for data (program-usage) and batterydrain in mA or mW.

WARNING !!! Use this piece of software at your own risk !!! I am not responsible for any damage caused by this software !!! WARNING

Within the execution-context of a today-plugin, there are more things one can do, thus this plugin provides some further needfully functions.

The latter comes from the ti-specs and works similar to the well known application OmapClock.exe of intruders (xda-developers).

WARNING !!! Use this piece of software at your own risk !!! I am not responsible for any damage caused by this software !!! WARNING

After installation, there is only the “Show Plugin” activated. You can activate the other functions in the Options-Dialog of HomeScreen PlusPlus as shown in the following screenshots.

How can i show or hide a row?

First of all you need to know that a short tap on the left-most icon of a row does show or hide the next row.
e.g. In the following image you can see only the first row.

If you tap on the left-most icon as shown in the previous image, then the next (second) row gets visible. A tap on this place again will hide the second row, thus with each tap the visibility of the next below to the current row gets toggled.

No rule without an exception: The last row itself can be hidden by tap on the left-most place.

allows to set the main-functions. 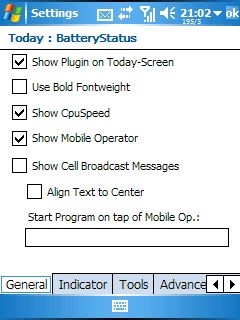 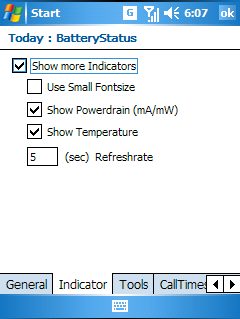 allows to make more indicators visible. All these indicators activates a periodically poll for the values. An invalid or inappropriate value of an indicator indicates that it isnt supported by your hardware or correctly implemented by the oem of your hardware.

Show Powerdrain: The batterydrain is shown in mA or mW. A prefixed plus indicates charging. No sign prior to the mA/mW-value indicates discharge or use of ac (Note: this behaviour depends heavily on batterydriver even though it is specified by MS-API). You can toggle between mA and mW by tap on the reading.

Free memory: This reading can be toggled between free memory of program-space/sd-card or data-memory for program-execution by tap on the reading.

allows to set functions for wakeup/resume of device. 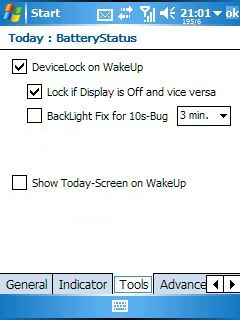 There are registry-values affecting DeviceLock:

is visible only if a omap-cpu was detected (of course, the XDA Neo must have one). 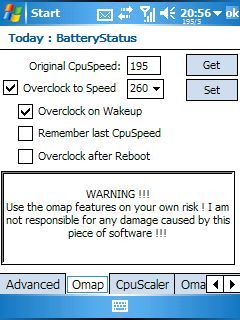 WARNING !!! Use this piece of software at your own risk !!! Overclocking means that you run your cpu at a clockspeed not inteded by the manufacturer or provider of your device !!! I am not responsible for any damage caused by this software !!! WARNING

If you want to deactivate or activate (toggle) the option “Set on wakeup” without going into the options-dialog, you can do this by tap and hold on the cpuspeed-reading (MHz-Text).

Thats it for overclocking, but be aware that each time the device starts up, then the plugin is loaded and executed as configured. That is, if you have set a too high cpuspeed and caused your device to reboot –> your device will end up in a loop of startup, freeze or reboot, startup, freeze or reboot… which will never end without manual intervention.
To reduce loss caused by this circumstance, the plugin will be disabled if HomeScreen PlusPlus has detected 8 softresets in succession without using the device for more than 4 minutes after at least one of the softresets. If you run into this situation, you must reenable the plugin by enter the options once.

allows to set the calltimes-functions. 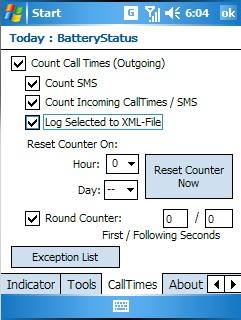 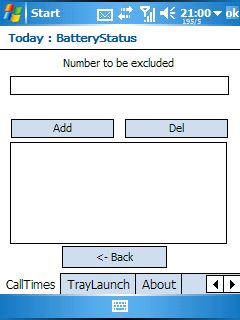 shows the About-Info, where you can find the version of HomeScreen PlusPlus. 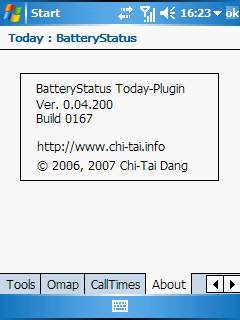 In order to uninstall the plugin, you need to make use of “Remove Programs” of Windows-Settings.

If you are using the very old version 0.02.403, then you must deactivate/uncheck the plugin at first by Start/Settings/Today/HomeScreen PlusPlus.

If you failed to uninstall, then you can manually remove it by means of an registry-editor and totalcommander: 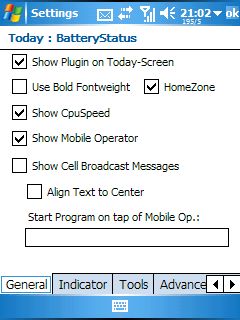